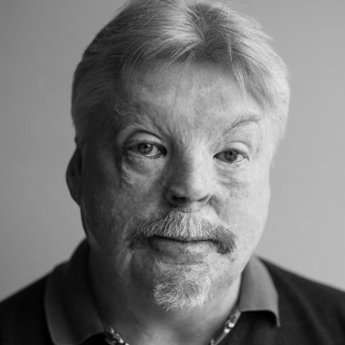 In 1982 the Sir Galahad was destroyed in Bluff Cove on the Falkland Islands. On board was Simon Weston, Welsh Guardsman, a name and face that was going to become well known for his struggle to overcome his injuries (46 per cent burns) and redefine his role in life. Weston’s message is one of achievement, of triumph over adversity, of seizing the moment and succeeding.

Following his injuries, Weston ‘s road to physical, spiritual and mental recovery saw him active in a number of highly successful ventures, including The Weston Spiri’, a Liverpool-based young people’s charity. His charitable work earned him an OBE in the 1992 Queen’s Birthday Honours.

Most recently, in the 2016 New Year`s Honours, Weston was awarded the CBE for his charitable work and was awarded the Outstanding Contribution Award at the 2017 Soldering On Awards.

For two years, Weston was the president for Wales Scouting, and is currently the patron of the Falkland Veterans Foundation, The Enham Trust, Allied Service Trust and an Ambassador for Changing Faces.  Most recently he has helped to set up Care After Combat – a charity for veterans.

A successful businessman too, Weston currently runs his own security business in South Wales and is a director of Zappawoo, set up to help transform the disabled holiday market.

Weston’s message is one of achievement, of triumph over adversity, of seizing the moment and succeeding, and one that he will deliver to a room of high profile events professionals on February 21.

Weston’s story, which has been well-publicised, will be the foundation of his keynote – in it, he will not only talk about overcoming adversity and positive mental attitude but also his experiences of being in the public eye for more than 30 years.