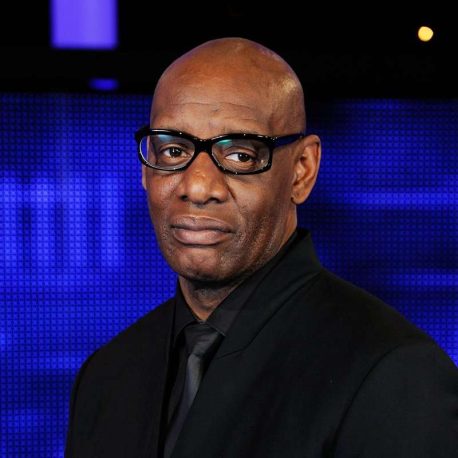 Hailed as one of the best brains in Britain, Shaun Wallace has taken the intelligence-based game show circuit by storm. Best recognised as one of the iconic ‘Chasers’ on ‘The Chase’ Shaun utilises his academic excellence to outwit contestants of the game show. Also, a practising barrister and lecturer, the recognisable television personality has had a vast and accomplished career. With a professional background, and esteemed status in the media, Shaun is perfectly placed as a conference facilitator able to take the reins on your day. Similarly, his expansive career makes for an engaging and entertaining after dinner talk, with his charming on-screen personality transiting into his speaking engagements.

Nicknamed ‘The Dark Destroyer’ and the ‘Legal Eagle’, Shaun has dominated ITV’s game show ‘The Chase’ since 2009. A key feature of the show from its inaugural series, for over a decade, Shaun has been impressing audiences with his wealth of knowledge across a spectrum of subjects. Regularly seen dashing contestants’ dreams of cash with his speedy answers and depth of expertise, Shaun even starred in a 2018 special of The Chase Australia. A fan favourite from the show, his cool demeanour and personable nature ensures a good rapport with audiences, both live and on-screen.

Admitted to the bar in 1984, Shaun’s early career was dedicated as a legal professional. Holding a BA in Law from Inns of Court School of Law, Shaun continues to maintain his professional career, aside from his media commitments, and has contributed to hearings as legal counsel, across the country. Currently, a member of Great James Street Chambers, Shaun also acts as a lecturer, teaching in subjects like environmental law and health and safety law. Utilising his presentation skills developed in his educational and legal career, Shaun’s appearances at events are always highly professional.

Making his mark on the quiz show scene in 2004, Shaun won the elite programme ‘Mastermind’ before going on to reach the finals of the equally challenging ‘Are You an Egg Head?’. Maintaining his dominance in the field, Shaun has also appeared on the likes of: The Weakest Link, Celebrity Catchphrase and Countdown, proving he really is brilliantly braining. Placing in the top 300 people worldwide at the World Quizzing Championships 2012, Shaun’s talents are recognised globally. In 2020, Shaun starred in ITV’s Don’t Rock the Boat.

In 2020, Shaun appeared in Racism: My Story, a programme responding to the rising racial tensions across the globe, as well as Good Morning Britain. On the shows, Shaun candidly shared the experiences that define Britain’s rampant racism, through emotive interviews. After being told that he would never make it as a lawyer, with determined resolve Shaun proved his critics wrong, dismantling the stereotypes projected onto him in his youth. Diversity continues to be an imperative topic of conversation in business, with few communicating the importance of inclusion quite as powerfully as Shaun. Benefit from the intellectual and entertaining contributions of Shaun Wallace, when you book him for your next occasion.